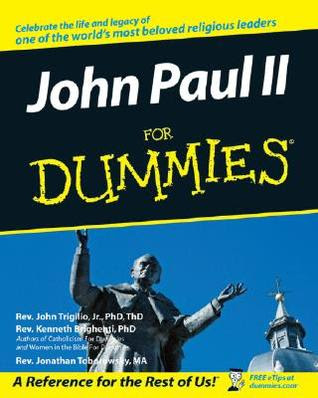 
The first Polish Pope, John Paul II, was a thinker and a leader whose religious convictions defined a new approach toward world politics--and changed the course of history. When he died on April 2, 2005, millions around the world mourned his passing. No other person in recent history has had such a tremendous display of respect and honor. The fact that so many non-Catholics honored this man attests to his effect on the world--and not just within his own religion.Now, you can get to know the man behind the papacy and appreciate his remarkable achievements. "John Paul II For Dummies" is a friendly, plain-English guide to the life and legacy of one of the world's most beloved religious leaders. You'll discover: The Pope's influences His personal struggles How he impacted the Church His approach to world politics The ways he spread his message.

Overall, I thought this book was a good resource. However, I also thought there were several things that I really didn't like about this book. The biggest thing for me was that large chunks of the book weren't really about John Paul II at all. In some cases, this didn't bother me. For instance, there's a whole chapter on history in order to set up what was going on during John Paul II's childhood. Since I love history, that chapter kept me entertained. There was also a whole chapter about Benedict XVI and other such things that got annoying. It wasn't so much that the chapters were uninteresting or bad, but the book is supposed to be about John Paul II and large parts of the book really weren't.

The book was also a bit outdated and has Benedict XVI as pope. However, it's been sitting on my shelf waiting to be read since Benedict XVI was pope, so I went into it expecting that.

If you are interested in books about John Paul II, then I think this one is worth at least checking out. The information is presented in a way that is easy to follow, although recounts of John Paul II's childhood include some weird time jumps. However, I also think it would be easy to find better books about John Paul II if you really wanted to learn more about his life.
Posted by Haley Keller at 5:31 PM