The End of Year Book Survey has been hosted by The Perpetual Page Turner for five years now. It's a way to kind of sum up what you've read over the course of the year. This is my second year participating. You can also read my 2013 edition.

Number of books you read: 77 (as of December 21st; My best guess is that I'll finish one more before the year is out.)
Number of re-reads: 1 (This is hard for me to say for certain, but I'm fairly sure that the only book I re-read was Along for the Ride by Sarah Dessen. I don't re-read books as often as I would like.)
Genre you read the most from: This is also difficult since I never sort my books by genre. My best guess is fantasy, but contemporary seems pretty close.

1. Best book you read in 2014?
I added exactly one book to my all time favorite's list on Goodreads this year: Fahrenheit 451 by Ray Bradbury.

2. Book you were excited about and thought you were going to love more but didn't?
I don't think I had any huge disappointments this year where I'd built a book up to something it didn't live up to, but I was hoping to like Matched by Allie Condie more than I did. I did like it and want to continue the series (I just bought the second recently.), but I thought I'd like it more based on the premise.

3. Most surprising (in a good or bad way) book you read in 2014?
I read Candide by Voltaire for my humanities class, and was not expecting to enjoy it as much as I did.

4. Book you "pushed" the most people to read (and they did) in 2014?
I've gotten people to read a few different books this year, but I can't think of one in particular. I'm going to go with The Fault in Our Stars by John Green. That seems like an obvious one since the movie also came out.

5. Best series you started in 2014? Best sequel of 2014? Best series ender in 2014?
Best series I started would the the Piercing the Veil series by C.A. Gray which starts with Intangible. I actually read the entire series this year, and it was all really great. It would almost be my "best series ender" too, but I have another in mind... (Also, The Name of the Star by Maureen Johnson almost got this.) Best sequel is going to go to Unsoiled by Lelia Eye, which I have yet to write a review for since I just finished it a few days ago. Poison Tree by Kacey Vanderkarr is another one that I'm still in the middle of, so I can't really officially give it the "best sequel" title yet. For best series ender is it really going to be surprising that I say City of Heavenly Fire by Cassandra Clare? I loved that book so much that I did a four part video review for it and each part is at least 17 minutes long. It was ridiculous.

6. Favorite new author of 2014?
Maureen Johnson. I'd been following her on Twitter for years, so I'm happy to have finally read one of her books. Technically I read Let It Snow a long time ago, but that's not quite the same.

7. Best book from a genre you don't typically read/was out of your comfort zone?
A Farewell to Arms by Ernest Hemingway is one I never would have picked up if it wasn't assigned in class. Mostly because I had never had a good experience with Ernest Hemingway before reading it.

8. Most action-packed/thrilling/unputdownable book of the year?
I think I'll have to go with City of Heavenly Fire again.

9. Book you read in 2014 that you are most likely to re-read next year?
We've already established that I'm terrible at re-reading, but I have to say City of Heavenly Fire again (and the other TMI books I read this year) because I've already re-read parts of it whenever I start getting emotional about particular scenes. 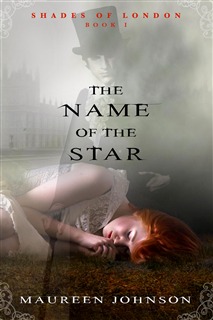 11. Most memorable character of 2014?
I could go on and on about Alec Lightwood, so let me just leave you with this:

“I did not make a pie,” Alec repeated, gesturing expressively with one hand, “for three reasons. One, because I do not have any pie ingredients. Two, because I don’t actually
know how to make a pie.”
He paused, clearly waiting.
Removing his sword and leaning it against the cave wall, Jace said warily, “And three?”
“Because I am not your bitch,” Alec said, clearly pleased with himself.”

13. Most thought-provoking/life-changing book of 2014?
Again, going to go with Fahrenheit 451 by Ray Bradbury.

14. Book you can't believe you waited until 2014 to finally read?
So many. The Name of the Star by Maureen Johnson is definitely one since it was sitting on my shelf for ages.

15. Favorite passage/quote from from a book you read in 2014?
See questions 11. I could also pull out multiple quotes from Fahrenheit 451, but I feel like I'm overusing that book at this point.

16. Shortest and longest book you read in 2014?
I've read a lot of self-published books with "unknown" page numbers on Goodreads, which makes this a bit of a guess. Shortest: Rumspringa Break by Kristina Ludwig. Longest: Currently, City of Heavenly Fire by Cassandra Clare, but I'm reading No Higher Honor by Condoleezza Rice, which will beat it if I finish it before the year is over.

17. Book that shocked you the most?
I need to stop saying City of Heavenly Fire.

18. OTP of the year (you will go down with this ship!)
Magnus and Alec from The Mortal Instruments series, including City of Heavenly Fire although I read more of the series this year. I said them last year too, but since the series is over, this is my last chance! It's been such a long time since I've shipped a couple from a book this much. Simon and Isabelle were also so close after CoHF.

19. Favorite non-romantic relationship of the year?
I'm a huge fan of friendships in books, and I've been lucky enough to read about enough great ones this year that I'm struggling with this. As much as I want to avoid answering The Mortal Instruments anymore, I'm going to choose Clary and Simon for this.

20. Favorite book you read in 2014 from an author you've read previously?
Ignoring The Mortal Instruments, I'm going to answer What Happened to Goodbye by Sarah Dessen for this.

21. Best book you read in 2014 that you read based solely on a recommendation from somebody else/peer pressure?
Maybe The Great Gatsby by F. Scott Fitzgerald. I read it for a school paper, but I chose it because I felt like everyone put me had read it, especially among English majors.

22. Newest fictional crush from a book you read in 2014?
Simon Lewis from The Mortal Instruments. Technically I had read about him last year, but it was in the books I read this year that he really solidified himself as one of my favorites.

23. Best 2014 debut you read?
I've read a lot of great self-published books this year that were debuts, and I've mentioned them each already. I'd say it's a tie between about three different books.

24. Best world-building/most vivid setting you read this year?
The Piercing the Veil trilogy by C.A. Gray.

25. Book that put a smile on your face/was the most fun to read?
Beastly by Alex Flinn since I haven't mentioned it yet, and I love Beauty and the Beast retellings.

26. Book that made you cry or nearly cry in 2014?
City of Heavenly Fire had me crying for the last, like, three or four chapters nonstop.

27. Hidden gem of the year?
Again, all of the great self-published books I read this year. There were a few misses too, but I did find a good amount of really great ones. I'll go ahead and say Reflection Pond by Kacey Vanderkarr since I'm reading the sequel now and loving it.

28. Book that crushed your soul?
Yet again, City of Heavenly Fire.

29. Most unique book you read in 2014?
I'll say Girl at the End of the World by Elizabeth Esther because it seems to stick out among the other books I read this year. I think it's the only memoir other than the book I'm currently reading, which is also entirely different.

30. Book that made you the most mad (doesn't necessarily mean you didn't like it)?
City of Heavenly Fire made me experience every emotion to the extreme.

1. New favorite book blog you discovered in 2014?
There are several great ones I could say, but I'm going with Nose Graze.

2. Favorite review you wrote in 2014?
This was a video review, but doing four different videos for City of Heavenly Fire was memorable.

3. Best discussion/non-review post you had on your blog?
I wrote about death, and apparently that drew in a lot of people. I think it might have gotten hits because I used a John Green quote as the title to be honest.

4. Best event you participated in?
The release day blitz for Impossible by C.A. Gray.

5. Best moment of bookish/blogging life in 2014?
I've had a lot of really great "I'm so glad I'm an English major" moments this year, even if I've also had moments of insane stress levels.

6. Most popular post this year on your blog (whether it be by comments or views)?
My review of Silence by Natasha Preston. I'm really surprised because it's self-published, but it seems to be a fairly popular book for a self-published book, so I guess that's why.

7. Post you wished got a little more love?
I'm almost definitely going to be skipping over some posts that I was actually really happy about. I do wish more people read by Legend of Korra review though because I love that show, and I love fangirling all about it with others.

8. Best bookish discovery (book related sites, book stores, etc.)?
I've found so many Etsy shops with amazing book-inspired items. I've started a list of things I want. It might be a problem.

9. Did you complete any reading challenges or goals that you had set for yourself at the beginning of the year?
I set my Goodreads reading challenge at 60 books, and as of today (Dec. 21st) I've read 77. Yay!

1. One book you didn't get to in 2014 but will be your number one priority in 2015?
I have the sequel to Matched setting on my shelf. It's going to be my first of my goal to finish as many series that I've started as I can in 2015.

2. Book you are most anticipating for 2015 (non-debut)?
Sarah Dessen's newest book. Even though she already has one book out that I haven't read yet.

3. 2015 debut you are most anticipating?
I've felt so out of the loop with book releases lately (and everything else) due to school. The fact that I have no idea about any 2015 debuts is really making that obvious right now.

4. Series ending/a sequel you are most anticipating in 2015?
These are already out, but the Star-Crossed series by Rachel Higginson had it's two final books come out this year, and I desperately need to get to those. (That's one of my favorite series of all time.) As for actual releases, I'm going to say the third book in the Shade of London series by Maureen Johnson even though I still have to read the second.

5. One thing you hope to accomplish or do in your reading/blogging life in 2015?
So many things. I want to catch up on series I'm in the middle of, or make progress at least. As for blogging, there are so many things I want to do but never do. I've wanted a new blog design for years, but I have no idea if that will happen. I'm also currently working on creating another blog (which isn't going to be predominantly about books), so I have that in progress.

6. A 2015 release you've already read and recommend to everyone?
I'm not cool enough for that.
Posted by Haley Keller at 2:48 PM