I haven't written a life post since the beginning of finals week, and I honestly can't believe I'm even getting to it now.

This past week was crazy. Obviously, there was finals. Then I moved out of my dorm on Thursday and drove several hours home. On Saturday, I went back up to Indianapolis where I went to a Sarah Dessen signing (which was absolutely amazing, I'll get to it in a second) and also helped my sister move out of her apartment and then drove home the same day. Today my allergies really hit me. They're always worse when I'm at home, and the weather change is making it even more worse. Overall, I just feel really out of it and kind of miserable if I'm being entirely honest. I haven't felt this bad physical in such a long time. I've been lucky to not get sick in more than a year, and even though I know this is only allergies, this is the worst I've experienced in quite a while.

Anyway, in between all of the driving and moving, I got to meet Sarah Dessen at a signing, and it was awesome. It was so amazing to see her in person and get to hear her talk. Amazingly, I was able to actually get out what I wanted to say to her when I saw her unlike the time I completely froze upon meeting Little Mix. I got the first book I ever bought of hers (and the first YA book I ever owned) signed as well as my favorite of her books and her new book. My sister was there too and had a nice exchange about how the editor of the book had the same name as her. It was awesome. I even have visual proof that it happened. 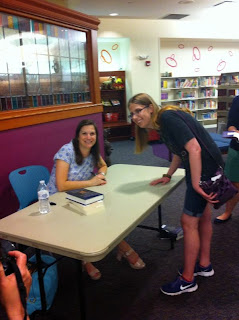 I'm really happy to have had the experience. It was fantastic and made having to drive to Indy and back just two days after I already did so worth it. (Because helping my sister move out was not a fun experience, let me tell you.)

Today was pretty much me trying to recuperate from yesterday but actually just feeling sicker. Here's hoping that I wake up feeling infinitely better tomorrow. It's doubtful, but I'll hope.

And I almost forgot, but I did post a video about the Clary casting for Shadowhunters. It was just about the only thing I had the time to do online this past week.
Posted by Haley Keller at 11:43 PM