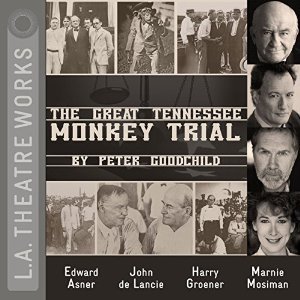 Before listening to this, I hadn't listened to an audiobook since the Harry Potter series years ago. Recently, I'd wanted to listen to them, so when I learned that this site was releasing two free audiobooks from download each week over the summer, I was interested. I figured this would be a good way to explore audiobooks for the first time.

I was genuinely interested in this audiobook as well. We watched the movie about the Scopes trial in high school, and I also observed in a classroom last year while they were studying the play. Of course, we also talked about it in history class in high school, which is actually why we watched the movie, but I don't remember discussing it in huge detail other than watching the movie. At any rate, nothing in this audiobook felt new per se, but I wasn't expecting it too.

It's worth mentioning that this isn't an audiobook with one narrator reading the entire story. It's a recorded play, which isn't what I would necessarily think of as an audiobook. Because of this, there are also times where you can tell that actors forget or stumble over their lines, and you also hear audience reactions in several places (in addition to reactions that are part of the play that are meant to be the crowd in the story, which I admit felt a bit confusing at times).

Overall, I enjoyed listening to this audiobook. I probably wouldn't have bought it myself. There were some parts that felt too summarized when the narrator just told you what had happened. I would rather watch the movie, which I felt explored the story more effectively and didn't summarize chunks in such an obvious way as the play. I would probably watch the actual play if I had a chance, but I'm not sure if I'll ever feel that interested in listening to it in audiobook format again. I think the play is something that was meant to be seen and not just listened to. It just didn't always seem to translate well.
Posted by Haley Keller at 3:13 PM