#PotterheadJuly: Head Canons About the Next Generation Kids 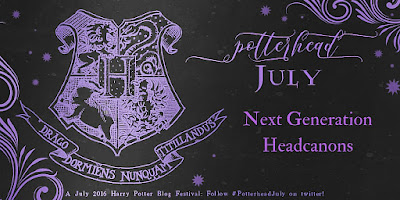 This month culminates in the release of Harry Potter and the Cursed Child, and in honor of the release, Aentee over at Read at Midnight has put together Potterhead July, a blog festival where multiple bloggers are posting about Harry Potter each day. You can check out the schedule at the previous link and read everyone's posts so far.

Today, I get to write about my head canons about the next generation. There are three (well, kind of four, but two are heavily tied together) head canons in particular that I want to talk about and are the entire reason I chose this topic. Even within discussions about Harry Potter, I don't often have an opportunity to discuss my next gen head canons, so I couldn't resist.

Let's get the one that people will likely find the most strange out of the way: I ship Lysander Scamander and Molly Weasley II. Yep, the son of Luna Lovegood and the daughter of Percy Weasley. I know, I know. That sounds like something out of left field, and it likely doesn't make sense to anyone who hasn't seen the inner workings of my brain. Let me explain how I came to care about two characters we know almost nothing about...

You see, more than five years ago, I was active on a Harry Potter fanfiction challenge board. (Most of the time, I wish I was still active there, but I don't have the time to complete challenges if I want to work on my own fanfiction ideas too.) One of the challenges I was given was to write a story with Lysander and Molly that used the prompts frozen lake and lost. It didn't have to be romantic (as far as I can remember), and when I was given the challenge, it was one I had to sit with for a while before I knew what I was going to do.

It was such an odd pairing of characters, which, admittedly, is what made it such a great challenge to give someone. There was nothing for me to go on as to what their personalities were like, but I couldn't stop thinking about their parents and how interesting a conversation between Luna and Percy would be. You have to admit that such a conversation would be something amusing to see. So, when I wrote the story, I had to give Lysander a bit of Luna's personality and Molly a bit of Percy's. I couldn't resist, although in a longer story I would have enjoyed fleshing them out and not just making them imitations of their parents.

Suddenly, what had been an odd fanfiction challenge had me excited, and by the time I posted the one-shot, I found myself feeling fond of the pairing. I may not be quite as invested in them as I am Ron/Hermione, but I'd say I'm a fan.

As I haven't read any Cursed Child spoilers, I can't tell you if either of them appear, but if they are seen, I'd be interested in seeing how they're portrayed. Maybe I'd come out of it no longer shipping them or maybe my feelings would be strengthened. If they're not seen at all or are only their briefly, then I suppose I'll largely be stuck with my own versions of the characters, and I'll probably continue to ship them like I do mow.

My second big headcanon is something that I feel strongly enough about to argue with people: Teddy Lupin is a Hufflepuff. He just is. You can think whatever you want, but I refuse to believe he was sorted into any other house. (Please, please, please, don't let Cursed Child shatter this for me.)

There are several reasons why I'm adamant about this. Yes, Teddy is Remus' son, and I'd love for him to have a connection to Remus like sharing a Hogwarts house. Remus is one of my favorite characters, but so is Tonks. I feel like, with the amount of head canons people have about the next generation kids being sorted into Gryffindor, I like the idea of Teddy taking after this mother and going to Hufflepuff instead.

Plus, Hufflepuff doesn't get enough credit. The only truly important character we get in the series from Hufflepuff is Tonks. We have more than enough from Gryffindor. That only makes me want Teddy to take after his mother even more, and I'm saying this as a Ravenclaw (or a Slytherclaw, it's still up for debate).

As Teddy is, admittedly, my favorite of the next generation, I do have another head canon concerning him, and that's that Harry gave Teddy the Marauder's Map instead of passing it onto his sons. I've dedicated an absurd amount of time to thinking about this.

Harry has three kids, and James will probably get the invisibility cloak because he's the oldest, which makes me feel bad for Albus and Lily. (I always feel that way about inheritances in stories if there's more than one kid. I feel so bad for the gets that didn't get whatever it was.) While Harry could also pass the Marauder's Map onto one of his kids, I like the idea of it going to Teddy a lot more.

It was, after all, created by Teddy's father instead of a grandparent like in the case of Harry's children. I think Teddy would be more appreciative of the meaning behind the map than Harry's kids as he's grown up without Remus in his life. Having something James helped make just wouldn't have the same effect on Harry's kids as having something Remus helped make would have on Teddy. I imagine the moment Harry gives it to him to be a touching one.

Those are the head canons I'm steadfast about. There are other aspects of the next generation that I'm iffy on. Like, I've never been able to decide what house I think Albus was sorted into. I can be easily influenced to believe he wound up in just about any house, so I can't really say that I have a head canon about it.

Do you guys have any head canons about the next generation of Harry Potter characters? Or do you have an opinion on one of mine? Let me know in a comment.