#CritYourFaves: Albus/Scorpius in Harry Potter and the Cursed Child - Queerbaiting? 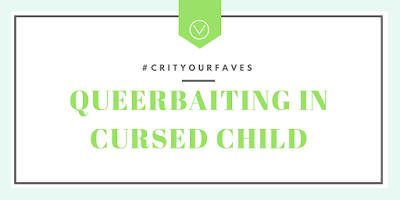 This month I'm participating in #CritYourFaves, a blog festival hosted by Aentee at Read at Midnight. The purpose of this blog festival is to take a critical look at the things we love. We all love works that have problematic aspects, and while it's okay to like works that have problems, that doesn't mean we should let them off the hook. In many ways, it's more important to critique the things you love than anything else, which is why I'm so glad that Aentee put this festival together. Critiquing our faves is going to make a much more substantial difference than critiquing the things we hate.

When it came to signing up for a topic, I was indecisive at first. There wasn't a lack of ideas. I'm all too aware of a number of problems within my favorite works. Queerbaiting in Cursed Child was a topic that immediately came to mind, probably because Cursed Child has been on my mind a lot since it was released.

The idea was immediately the one that screamed to me the loudest, but I was hesitant. Surely, there was a better person than me to talk about such a topic, but I made myself write it down on the sign up form anyway, knowing I'd be annoyed with myself if I didn't. This topic has already been talked about by others more eloquently than it will be here, but this is an important topic, one that deserves to be talked about.

Before I get into queerbaiting within Cursed Child, however, I want to make sure everyone reading this post is aware of what queerbaiting is. It's a new term and one only common in certain circles, so I'm sure it would be easy for someone to stumble across this post without knowing it.

Queerbaiting is when the creator (or creators) of a work (whether that be literature, television, film, etc.) deliberately add hints of a romantic relationship between two characters of the same gender in the hopes of keeping certain factions of their fandom (particularly the queer members) happy. However, the creators have no intention of following through and developing a queer relationship because they want to keep the rest of the fans happy, and sometimes, the baiting can be used for comedic effect.

Countless works have been guilty of this. TV shows especially.

(Another important note about language in this post: I will be using the term "queer" throughout instead of LGBT, LGBT+, LGBTQIA, etc. While this term has a history of being used pejoratively, it has been reclaimed in more recent years as an inclusive term for the LGBT+ community, as not every identity is represented within the initialism, and as a label some choose as the primary label for their sexuality. Use of this term can still be controversial, but I have used it within this post in an effort to show that I am referring to all queer identities, not just those labeled within the initialism.)

Now, to get to Cursed Child. I do want to start this discussion by saying that I think it's debatable whether or not Cursed Child contains queerbaiting in the most literal sense of the term. That is, I'm not sure if there's enough evidence to say that the creators realized what they were doing. However, that doesn't erase what is in the text, which is what I am going to focus on instead of what intentions may or may not have been behind the text. In any case, being oblivious to the harm actions cause does not erase the harm of those actions.

In my original review of Cursed Child, I discussed how out of the blue Scorpius' crush on Rose came to me at the end. I hadn't interpreted their interactions earlier in the play as a crush on Scorpius' part. Because there was such an emphasis on Scorpius and Albus' friendship, I merely interpreted those parts as Scorpius wanting to become friends with Rose for Albus' sake.

I do acknowledge that this is a play first and foremost and how clear Scorpius' supposed crush is could depend a lot on how those scenes are portrayed by the actor. I haven't seen the play performed on stage.

I know I'm not the only one who saw that while reading. Plenty of others have said it. If I hadn't been so unwilling to get my hopes up (I suppose I'm disillusioned), I would have expected them to end up together. If one of them were female, they would have ended up together. There is little doubt in my mind about this. It's only heteronormativity and the fact that some (or should I say "many"?) see a relationship between two boys and immediately assume that it's not romantic. They can be intense as they want, but "Nope. Not romantic."

To be fair, there is always going to be a gray area between friendships and romantic relationships. Where exactly that line rests is negotiated between people, and it can vary depending on the individuals involved. However, culturally speaking, there's a certain range we expect that line to fall within.

It is difficult for me to wrap my mind around Scorpius and Albus' friendship being platonic largely because of the intensity of their friendship. I love fictional friendships. I love strong, unbreakable fictional friendships, which is epitomized in the Golden Trio. However, Scorpius and Albus felt like something else while I was reading. "Friendship" doesn't seem to cut it for them. I've never seen two friends with that intense of a "friendship" unless romantic feelings were somehow involved (even if they were one-sided). I can't separate that from the way I view the book or the way I view Albus and Scorpius. There's more there. There has to be.

I'm not alone in this. The Guardian published an article in which Albus and Scorpius' relationship is described as "intensely codependent".

Vox has a particularly great article that also touches on other issues surrounding Harry Potter. Here's one particular gem, though I highly encourage you to read the whole thing:


But Rowling’s wizarding world is already rife with intimate straight male friendships: Again and again, her plots turn on male camaraderie, male rivalry, and, often, betrayal among male friends. Harry and Ron have a deep and intimate friendship for seven books. What they don’t have is queer subtext: no repeated moments of charged physical contact, no repeated speeches of how much they love each other and can’t live without one another’s friendship, no instances where seeing their friend’s romantic interest in a girl inspires a rush of jealousy. In short, they have none of the specific homoerotic hallmarks of Albus and Scorpius’s relationship.

And these are just examples of two big sites writing about the topic. This says nothing about the countless Tumblr users who have said these same things and who are understandably upset.

Harry Potter is magical to so many of us. It's our escape from the real world, and understandably, it is a place where fans want to see themselves represented. Harry Potter has made strides in some ways, such as by casting a black woman as Hermione, but it has failed in so many others, from the train wreck that is the treatment of Native Americans in the North American backstories to the complete absence of queer characters (except a belated mention of Dumbledore) from the Harry Potter universe. We're doing a disservice to everyone if we don't discuss these failures at least as much as we discuss the successes.

There's plenty more that could be said on this topic, I know. That's why it's important that both Cursed Child and queerbaiting in other works continue to be talked about. I'd love to continue to this discussion through the comments or Twitter, Tumblr, etc. Just please remember to stay respectful.
Posted by Haley Keller at 4:17 PM