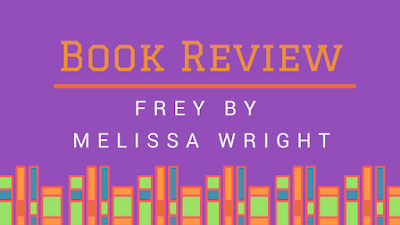 Unaware she's been bound from using magic, Frey leads a small, miserable life in the village where she's sent after the death of her mother. But a tiny spark starts a fury of changes and she finds herself running from everything she's ever known.
Hunted by council for practicing dark magic, she is certain she's been wrongfully accused. She flees, and is forced to rely on strangers for protection. But the farther she strays from home, the more her magic and forgotten memories return and she begins to suspect all is not as it seems.

Frey is about elves, which is a supernatural creature that I rarely read about. That's not because I avoid them but because I so rarely see them in books. I was excited to read a book all about them.

However, in the end, I found myself more confused and bored than anything else. The largest contributing fact to this, as far as I can tell, is how often the main character Frey passes out in this novel. You get everything from her POV, so when she's knocked out, she has no idea what's going on. Understandably, she wakes up in a fog each and every time. This could only happen so many times before I as a reader began to feel just as confused as Frey did. Maybe this would work for other readers. For me, I started to feel like there was too much confusion. I didn't understand what was happening, and it made me lose interest.

Frey never receives answers in this book except one towards the very end. I think there needed to be more (smaller) answers to various questions scattered throughout the novel. Without it, I never felt like my reading was paying off. I think part of the problem was also how few secrets there were, which meant there wasn't much to give away without giving away anything. Essentially, I suppose, the plot needed to be more complex. (Honestly, it makes no sense that the other characters don't reveal anything to her when they so easily could. Maybe there are reasons for it that are explained later, but I came out of the book feeling like they'd been stupid for not talking to her about what was going on with her.)

As it was, the twist at the end was so obvious that I hope it wasn't supposed to be a shocking moment, but I have countless other questions that I don't feel were adequately built up in the first book. Instead of coming out of the book excited to read the next and discover more, I came out of it feeling like I would continue to feel nothing but confusion with no pay off from later books in the series. Because of this, I don't think I'll be continuing with the series. I have others that I would much rather finish.

This book was well written on a surface level, but if you take the time to analyze the plot for even a moment, none of it makes sense. That's just too large of a problem to overlook or to try to deal with in a second book.

It is a shame though. I really need to find some more elf books.
Posted by Haley Keller at 11:09 PM