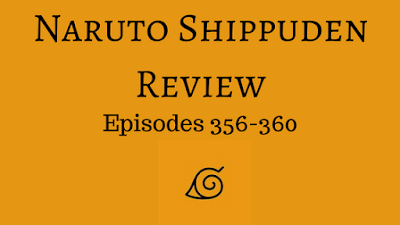 I'm reaching the point where I feel like I've been on this storyline for ages, and I'm unsure if I feel that way because of the amount of episodes or if it's just because of how long it's taking me to watch the episodes.

Either way, I don't necessarily think it's a bad thing. I'm enjoying learning more about Kakashi's past. It just seems to have lost a bit of the novelty that it possessed in the earlier episodes of this set, especially when there was a greater focus on Obito as well.

One thing I like about these episodes is how expansive they have been, and I do realize that that especially wouldn't be the case if they hadn't gone so in depth with Kakashi's past (though it's definitely contributing to how long this storyline feels).

I hadn't imagined Kakashi having such an upsetting past before this set of episodes. Despite the countless Naruto spoilers I am aware of, I'm not sure if any of them were about Kakashi's past. I'm not sure why that is considering I think I was spoiled on essentially everything else.

Of course, it's not just Kakashi's past we've been able to glimpse lately. We continue to see Kinoe/Yamato in these episodes, and I'm still really liking that. I didn't have any particular feelings on him before this, and now he's managed to grow on me. Not that he played that significant of a role in this particular set of five episodes.

The way they were able to tie Itachi's story into Kakashi's in these episodes and show them both seemed very well done, and I loved it. Itachi is another character that has grown on me over time and who I grow to appreciate more the more we see him, so I always like when he shows up again, even if it's only in flashback episodes such as these.

Overall, I think these five episodes managed to fill in information we didn't know previously or clarify some information, and I greatly appreciate that. Now we're getting close to when Kakashi is placed in charge of Team 7, and I am so ready for that.
Posted by Haley Keller at 10:42 AM