Posted by Haley Keller at 6:47 PM No comments:

Part of the reason why I haven't been posting much is because so much as been happening since I've been in Japan. One of those things was Awa Odori, a dance festival, which is held every August. It's one of (if not the biggest) things that the city I'm living in is famous for.

This is video I took of the Awa dance.
Posted by Haley Keller at 8:23 AM No comments:

Posted by Haley Keller at 6:21 PM No comments: 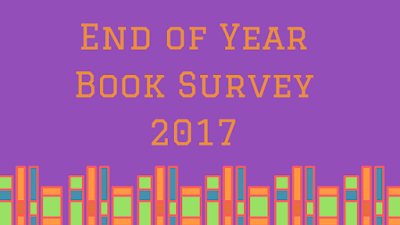 Just about everything about this blog was pushed to the side in the second half of 2017 as I settled into life in Japan. It makes me cringe when I remember that I haven't posted a TBR/wrap-up video in more than six months. (Those are coming back soon.) But I was determined to still do the the yearly survey from Jamie over at The Perpetual Page Turner. I think it's the jump start I need to dive back into things in 2018.

So, while this was also the first year that I didn't reach my Goodreads reading goal since I began using Goodreads, here's a look back on what I did manage to read in 2017.

Number of books you read: 44
Number of re-reads: 5
Genre you read the most from: This is tough to determine, but it looks like fantasy is just barely in the lead.

Clockwork Princess by Cassandra Clare. I know there are mixed feelings about Clare in the bookish and fandom communities, but the third book in the Infernal Devices really has stuck with me. Also, I was emotional but mostly fine for most of the book, and then the epilogue left me contemplating my mortality for weeks afterward. (No joke. I read a whole series with a character who was dying, and then it was just the epilogue that had me shaken. There was something about it.)

2. Book you were excited about and thought you were going to love more but didn't?

Some Go Hungry by J. Patrick Rammond. To be fair, most of my excitement was based on the fact that it's set in Indiana (and southern Indiana at that). That made me want to like the book. Unfortunately, while it was a good book in many ways and I found it fun seeing places I knew, I had a number of problems with the writing.

3. Most surprising (in a good or bad way) book you read?

Nolander by Becca Mills. I'm worried that I'm only choosing this one because I finished it so soon before writing this post, but I'm going for it anyway. Overall, this was a good book but not one that blew me away. Why am I choosing it as the most surprising? Well, the whole reason I read it is because I downloaded it to my Kindle in a deal with 13 other paranormal books that were combined into one anthology. This one is the fourth or so book I've read from that anthology, and it's the first one I've liked at all. It's enough to make me keep reading the others despite my previous bad luck.

4. Book you "pushed" the most people to read (and they did)?

I don't think I convinced anyone to read a book this year. I don't think I even tried to. As my silence on this blog can attest to, I haven't even pushed books on people through the Internet. Maybe next year I'll have an actual answer to this question.

Thanks to that anthology I mentioned above, I started a lot of series in 2017, but the one I'm going to put down as the best isn't one from that anthology. I'm going with A Shadow Bright and Burning by Jessica Cluess. The book wasn't perfect by any means, but it did leave me wanting to see how things go in book two. The second book in the series came out this year, so I need to get around to it.

I read books from a lot of new-to-me authors this year. I'll choose Jessica Cluess as my favorite, as I've spent a lot of time thinking about A Shadow Bright and Burning even months after I read it.

7. Best book you read from a genre you don't typically read/was out of your comfort zone?

I'll choose the Avatar comics as a whole for this. I don't read comics often, though I would like to read them more than I do. I think the main thing holding me back is that you can read a comic in one sitting and then you have to go get another one, so it feels like a bit of a money drain. I do enjoy them as a medium though, despite my lackluster enthusiasm for the Avatar comics in general.

8. Most action-packed/thrilling/unputdownable book of the year?

Clockwork Princess by Cassandra Clare. I don't want to go down a path of repeatedly choosing the same couple of books over and over again for this, though I admittedly don't have the biggest selection of books to choose from, but this really was Clockwork Princess. Though I had an idea of where things would go, having read the Mortal Instruments series, I was still very much invested in this book, and it definitely had me more concerned about the fates of its characters than anything else I read this year.

The Bane Chronicles by Cassandra Clare, Sarah Rees Brennan, and Maureen Johnson. This is a series of short stories, which makes it incredibly easy to re-read one whenever you feel like. Plus, something you just need more Magnus Bane in your life, and this is great for that.

Unfortunately, my copy is in the U.S. right now, so it's unlikely that I'll actually be re-reading it anytime soon.

I don't know if there is one particular book that stands out to me as beautifully written from 2017. I could say Clockwork Princess, but one of the things with Clare's books for me is that there are always some parts that I think are beautifully written and others were I'm left thinking, "What is this?" So I don't really know.

I suppose I'll say The Silkworm by Robert Galbraith, i.e. J.K. Rowling. It has some weird subject matter to describe as beautifully written, but this is J.K. Rowling we're talking about. She definitely knows how to put words together.

13. Most thought-provoking/life-changing book of 2017?

I'm going to choose Clockwork Princess again. As I said, the epilogue left me contemplating my own mortality for days afterward. I'm not sure that it was life-changing, but it definitely provoked some thinking. And panic. I'm still not entirely sure if it was a good or bad reaction to be honest.

I'll choose one I really love and agree with from Clockwork Angel by Cassandra Clare:

“One must always be careful of books," said Tessa, "and what is inside them, for words have the power to change us.”

17. Book that shocked you the most?

Career of Evil by Robert Galbraith. I've learned that the Cormoran Strike books never go how I'm expecting them too, but this one was especially not at all what I was theorizing as I read.

Herongraystairs: Infernal Devices trilogy by Cassandra Clare. Yeah, I'm not choosing sides in this love triangle. Everyone needs to be happy. I'd never been so conflicted over a love triangle. If only things had gone differently...

19. Favorite non-romantic relationship of the year

I would say Will and Jem in the Infernal Devices, but as I wish that was romantic, I'm not sure it really counts.

While the Avatar comics aren't my favorite, there are still aspects of them I like. One of those is seeing a tiny bit more of Zuko's friendship with the Gaang. It makes me happy.

20. Favorite Book You Read in 2017 From An Author You’ve Read Previously

This could still be Clockwork Princess, but I'll also throw The Silkworm out there.

21. Best Book You Read In 2017 That You Read Based SOLELY On A Recommendation From Somebody Else/Peer Pressure:

I don't have an answer to this as I didn't really choose any books based on peer pressure this year.

I say this every year, but again, I was too busy shipping characters with each other to develop any crushes myself. I couldn't possibly get in the way of all the true love.

A Shadow Bright and Burning by Jessica Cluess

I also have to go with A Shadow Bright and Burning for this. The world of the story is such a large part of what's made it so memorable to me.

25. Book that put a smile on your face/was the most fun to read?

Avatar: The Last Airbender: The Art of the Animated Series by Bryan Konietzko and Michael Dante DiMartino. I loved getting this look into the making of the series and getting to see all of the artwork.

Once again, I'll say A Shadow Bright and Burning by Jessica Cluess

28. Book that crushed your soul

Clockwork Princess by Cassandra Clare, more so because it reminded me that I, too, will die than because of the fate of the characters. Though I was sad for them too.

The Food of a Younger Land by Mark Kurlanksy, but it was mostly just really boring.

30. Book That Made You The Most Mad (doesn’t necessarily mean you didn’t like it)?

The Avatar comics made Mai and Zuko break up. I don't need to say anything more.

Honestly, I know that I followed a bunch of new people back during Armchair BEA, but I can't for the life of me recall who I followed now that I've struggled to keep up with book blogs for the past six months or so. This is one thing I need to do better in 2018.

There weren't many of them, so you'd think this would be quite easy. I'll go with Harry Potter and History, edited by Nancy Reagan.

Again, I didn't have many. Because I had almost none, actually, I'm going to go ahead and say that it was my announcement that I was moving to Japan.

It was definitely Armchair BEA, and I'm very sad that it won't be returning next year. It will be missed.

5. Best moment of bookish/blogging life in 2017

I got to visit a popular manga store here in Japan, and though I still can't read manga in Japanese, I enjoyed looking through everything they had. I may have bought more than one should when you can't actually read it yet.

6. Most challenging thing about blogging or your reading life this year?

It was honestly just making time for any of it when I was so focused on moving to Japan, working, and exploring Japan.

7. Most Popular Post This Year On Your Blog (whether it be by comments or views)?

Unsurprisingly considering how little I've been active, my blog hasn't gotten many visits this year.

Though it's a video, I believe it was one of my Shadowhunters reviews.

I'm not sure I have one of these this year, as most of what I wrote was just reviews, and the reviews I'm happiest with are the ones that got more attention.

I suppose I'll say Animate, both in Osaka and Hiroshima, which is that manga store I mentioned above.

10. Did you complete any reading challenges or goals that you had set for yourself at the beginning of this year?

For Christmas, I got Harry Potter, A History of Magic, and I'm extremely excited to read it cover to cover.

4. Series ending/a sequel you are most anticipating in 2018?

I know it's already out, but as I mentioned, I'm very excited to get around to the sequel of A Shadow Bright and Burning.

5. One Thing You Hope To Accomplish Or Do In Your Reading/Blogging Life In 2018?

After this year, I'll stick with "complete my Goodreads goal" as my main reading/blogging priority for next year.
Posted by Haley Keller at 3:03 AM 1 comment: