After my last post that hinted at some emotionally tough stuff, I should probably open this one by saying that everything is well and good here.

We're in the height of flu season, and the Coronavirus has been a hot topic here in Japan. Masks seem to have become an even more common sight than usual, and everyone is keeping hand sanitizer handy. Meanwhile, my allergies have been through the roof. At first, I thought I might be getting a cold, but I don't think that's what it is. Heaters always get to me because the air both dries out my throat and because of my dust mite allergy. So, at the coldest time of the year, I'm struggling a little bit to keep that in check.

Last weekend, a friend and I went to see a waterfall, but it turned out to be pouring rain on the day we'd planned to go. We went anyway, walking up the mountain in the rain, and the waterfall we saw was a lot smaller than expected. I think the big one was farther up the mountain, but with the rain and everything, we didn't go farther. It was an amusing experience, and we were lucky that, though it was raining, the temperature was rather warm.

I've also been trying to change up my routine quite a bit. Since it's January, it probably sounds like that's a New Year's resolution thing, but to be honest, I didn't even think of that until I was writing this post. Maybe that was in my subconscious?

It's no secret that I haven't been blogging as much since I started working full time, and that's true of many other things too. For a while, I was writing fiction (including of the fanfiction variety) with much more frequency, and I started volunteering as a tag wrangler for the Archive of Our Own. Both of those contributed to my lack of time for other things as well.

The past week or so, I started sitting down and thinking about how to more effectively manage my time. I'm trying the plan I came up with now (one reason why you're seeing this post now and not later), so we'll see how it works out. I'm sure I'll have to adjust it some as time goes on.

If anyone else is trying out changes for the new year, I hope they're going well. Here's hoping it won't be long before we see each other again in this space.
Posted by Haley Keller at 8:13 PM No comments:

Sitting down to write this post is difficult because I've had an emotionally tough week, but I can't yet tell you what happened. That will come in time, but for now, it's not something I want on the internet.

It's incredibly tough when a ton is happening that you want to discuss but you just can't. That's me right now. There are a million and one things that I want to share. It would feel so good to just sit down and write it all out for you, but it's just not a good idea right now. I'll have to stick that kind of stuff to a private journal for now.

The important part is that the toughest stuff is over for the moment, and I got the softest blanket ever in my Accio Box for the month. It's made to look like an invisibility cloak, and the color of it is also gorgeous. I'm in love. I've spent most of my Monday (one of my regular days off work) wrapped up in it, and I have to say it's been a good day. So here's hoping it'll be a good week.
Posted by Haley Keller at 8:32 AM No comments:

I'm back at home in Japan after spending Christmas in the US with my family and the New Year in Kyoto, Osaka, and Nara also with some of my family.

It was fun, but it was also exhausting. On the way back to Japan, we had a layover in San Francisco, and my mom, sister, and I wound up getting food poisoning that hit us a couple of hours into the plane flight. It was terrible. They were running out of puke bags by the end of the flight. It was an experience that I never ever want to repeat.

Unfortunately, that also made the first day of our trip in Kyoto somewhat difficult. (And the process of getting from the airport to our hotel was a nightmare. I don't recommend getting sick in a tiny highway bus bathroom.) The worst of it passed after about a day, but I think all of us were still feeling a bit weak for a few days after, and eating anything was a struggle, which got in the way of introducing my family to a bunch of Japanese foods.

Still, we had a good time overall, and I'm glad that my family got to see some of Japan. It was the first time any of them had visited me in the two and a half years I've lived here, so it was awesome getting to introduce them to some things, even if it wasn't as much as I had imagined.

I went back to work yesterday, but I only had to work one day before the weekend. Now I plan on relaxing, which I haven't done much of. (The exorbitant amount of sleep I did at the hotel while sick doesn't count.) I need some extra energy to get the year started, but I have a feeling that it's going to be a good one.
Posted by Haley Keller at 7:12 PM No comments:

Book Review: Beyond the Veil by Pippa DaCosta 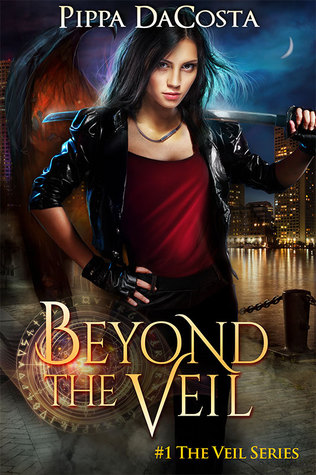 
If your ex is the Prince of Greed, you’d better be ready to raise Hell.
Charlie Henderson is living a lie. Her real name is Muse, she's half demon, and her attempt at a normal life is about to go up in smoke.
When an assassin walks into her life, leaving a trail of destruction in his wake, Muse must return to the one man she hoped never to see again and ask for help. The Prince of Greed isn’t known for his charity. The price is high, and the cost could tear her apart.
Trapped between the malevolent intentions of a Prince of Hell and an assassin with ulterior motives, Muse must embrace the lure of chaos at her core—the demon inside her—in order to survive.

Usually, when I read books, I take notes to better remember the details when I sit down to write the review. With this one, I either didn't take notes or the notes got accidentally deleted at some point. In either case, I'm working entirely off my own memory and recollection for this review.

What I do remember is finding every guy in this book creepy. Muse, the main character, was kept as a prisoner in the underworld by her father for a long time. The Prince of Greed (a demon) "rescued" her from her imprisonment. Muse is now trying to live independently from the demon who saved her, but you find out over the course of book that he's been stalking her and controlling her life in ways she was unaware of. Basically, she traded being her father's prisoner in the underworld to being a different demons prisoner on earth. However, this demon has been letting her live under the illusion that she's in control while he pulls the strings behind the scenes.

The way Akil (the Prince of Greed's name) is presented made me feel like I was supposed to be rooting for him and Muse to end up together in the end, but he was a stalker.

Sure, I realize that he's a demon. Stand up moral behavior is not what I'm expecting from a demon, but I don't want to be rooting for a stalker to end up with his victim. And the way it was treated as if it was an annoyance to Muse but not deeply violating and wrong rubbed me the wrong way. There's nothing romantic about it.

That's pretty much the only thing I remember about this story. I don't remember the characters or the plot standing out to me much. All I remember is being angry about how Akil was portrayed and Muse's relationship with him. I definitely don't plan on reading more of this series.
Posted by Haley Keller at 1:41 AM No comments: