Book Review: The Razvak Hunter by Arel B. Grant 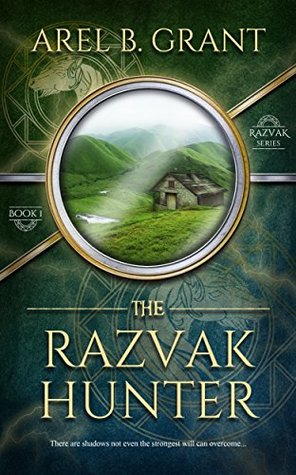 I received this book from the author in exchange for an honest review.
Published: February 28th, 2016
Publisher: BZN Writing House (self-published)
Read from February 25 to March 3, 2019
Synopsis from Goodreads:


Before…
Aelwyd has worked hard to become strong. As the Fairest One of Vallenthar, her power is formidable. Years of battle honed her into a fearsome warrior who never falters in front of an enemy.
However, there are shadows that when they come, they can swallow you whole.
After a hundred years of praying against it, the minute she walks into the chilling scene of death in front of her, she knows her personal nightmare is back.
He nearly destroyed her once, but she isn't a victim anymore. This time, she will stop him, or she will die trying.
Now...
Dalbran knows nothing of friends, joy, or mischief. The orphaned ward of a ruthless warrior woman, she’s never showed him love or affection. Instead she fills his days with learning the art of battle, savage teachings of how to survive in their harsh world. Days are filled with pain and exhaustion, but nighttime used to be his own. Even that is now lost, though, for something lurks in the shadows of sleep, clawing at him the moment his eyes close. He tells himself it’s okay, that he can handle it. However daunting the voices may be, however cold the hand that chokes him in the darkness, as long as it stays within the nightmare, everything will be all right.
As long as it stays within the nightmare…

The Razvak Hunter had a writing style that made me have high hopes for it when I started reading.

Not too far into the book, I realized that there were a number of typos in the book that left me wishing it had been better edited, but I enjoyed the author's voice enough that I wanted to keep reading in spite of that.

Unfortunately, the book's climax left me more confused than anything else. There are a lot of things that happen that don't make much sense, but I don't want to go into too much detail in this review because of spoilers.

That being said, the rest of this review does contain some spoilery details, so don't read past this point if you're worried about it.

The Razvak, who is the villain of the story, seemed to be rather easy to kill despite a lot of build up about how difficult it would be. The climax of the book played out very, very quickly. I felt like I didn't even have time to become invested before everything was over.

There were some details that were mentioned that left me going, "Wait. When did that happen?"

I either missed a lot of things or these things were happening off the page and only being told to us later. It would have been much more interesting to see them happen on the page, and then I don't think I'd have been as confused by the events of the book as they played out.

All in all, I think The Razvak Hunter as a lot of potential to be a really great book, but it felt like it needed to be fleshed out more. There were too many details that we're told about without seeing them, and it made the story both confusing and too fast. That's a real shame since I do think there were so many great seeds here that could have become an amazing story.
Posted by Haley Keller at 9:41 AM