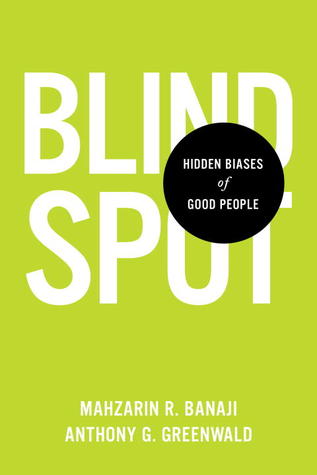 I know my own mind.
I am able to assess others in a fair and accurate way.

These self-perceptions are challenged by leading psychologists Mahzarin R. Banaji and Anthony G. Greenwald as they explore the hidden biases we all carry from a lifetime of exposure to cultural attitudes about age, gender, race, ethnicity, religion, social class, sexuality, disability status, and nationality.

“Blindspot” is the authors’ metaphor for the portion of the mind that houses hidden biases. Writing with simplicity and verve, Banaji and Greenwald question the extent to which our perceptions of social groups—without our awareness or conscious control—shape our likes and dislikes and our judgments about people’s character, abilities, and potential.

In Blindspot, the authors reveal hidden biases based on their experience with the Implicit Association Test, a method that has revolutionized the way scientists learn about the human mind and that gives us a glimpse into what lies within the metaphoric blindspot.

The title’s “good people” are those of us who strive to align our behavior with our intentions. The aim of Blindspot is to explain the science in plain enough language to help well-intentioned people achieve that alignment. By gaining awareness, we can adapt beliefs and behavior and “outsmart the machine” in our heads so we can be fairer to those around us. Venturing into this book is an invitation to understand our own minds.

Brilliant, authoritative, and utterly accessible, Blindspot is a book that will challenge and change readers for years to come.

Blindspot was written by two of the psychologists behind Harvard's Implicit Association Test. I first took several IATs when I was in college. Not as part of a college course but on my own after they were mentioned in the psychology course I was taking. The book itself issues a lot of warnings about taking an IAT because the tests can often alarm people who take them because it reveals inner biases. In fact, the level of caution that the book used when speaking about taking the test was surprising to me after my own experiences.

As I mentioned, I took several IATs, yet I wasn't surprised by my results. I would probably chalk that up to being well aware of the idea of inner biases and how they work before I took the first test. I knew I had them, so having them revealed wasn't a massive shock. In fact, the idea that inner biases exist and influence people's decision making feels like common sense to me, so in a way, the most shocking thing about Blindspot for me was the idea that it wouldn't be. I don't think I realized how new the idea of them are to psychology until I read Blindspot.

Learning the history behind the IAT and how psychologists learned how to actually measure hidden biases was the highlight of the book for me. I learned a lot about the history of the IAT that I found absolutely fascinating. I also used reading the book as a reason to go back and take the same IATs that I had taken in college.

Taking IATs is a very valuable form of self-reflection I believe, so I do think this book is a very valuable introduction to that for anyone who isn't aware of the tests already. This entire book did a good job of incorporating the history of the tests' development with explanations of the psychology behind them, and on top of that, it does a good job of making you reflect on reasons why inequality still exist despite the book very much being about the tests themselves and not larger structural inequalities.

Blindspot is a valuable reading experience for anyone, and I would highly recommend it.