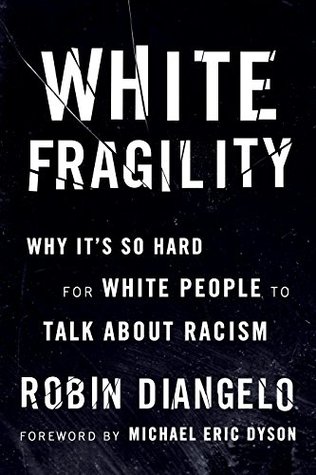 Antiracist educator Robin DiAngelo first coined the term "white fragility" in 2011, and since then it's been invoked by critics from Samantha Bee to Charles Blow. "White fragility" refers to the defensive moves that white people make when challenged racially. These include emotions such as anger, fear, and guilt, and behaviors including argumentation and silence. In this book, DiAngelo unpacks white fragility, explaining the underlying sociological phenomena. She'll draw on examples from her work and scholarship, as well as from the culture at large, to address these fundamental questions: How does white fragility develop? What does it look like? How is it triggered? What can we do to move beyond white fragility and engage more constructively?

I highly recommend White Fragility to other white people who want to fully examine their own views and actions in terms of race and who want to become better at recognizing and confronting racism.

White Fragility is an insightful look at how racism has shaped the way white people view the world. It makes its readers analyze the structures and systems that they've always taken for granted and never questioned before. Racism is embedded in every aspect of American society, and it's so deeply ingrained that many white people don't notice it's there because they don't have to. White Fragility is an important resource to help us white people grapple with the ways we help perpetuate racism and how we can work towards dismantling it.