Book Review: The Song of Achilles by Madeline Miller

Achilles, "the best of all the Greeks," son of the cruel sea goddess Thetis and the legendary king Peleus, is strong, swift, and beautiful, irresistible to all who meet him. Patroclus is an awkward young prince, exiled from his homeland after an act of shocking violence. Brought together by chance, they forge an inseparable bond, despite risking the gods' wrath.

They are trained by the centaur Chiron in the arts of war and medicine, but when word comes that Helen of Sparta has been kidnapped, all the heroes of Greece are called upon to lay siege to Troy in her name. Seduced by the promise of a glorious destiny, Achilles joins their cause, and torn between love and fear for his friend, Patroclus follows. Little do they know that the cruel Fates will test them both as never before and demand a terrible sacrifice.

The Song of Achilles was another Life's Library read that I'd been meaning to pick up since it came out in 2011 and I saw reviews for it seemingly everywhere. Life's Library has been doing a great job of helping me catch up on my miles-long "to read" list recently.

As is pretty clear from the title, this book is a retelling of Achilles' story in Greek mythology. Because I, like many people, was aware of parts of Achilles' story already, I had a good idea of what direction the story was heading in, but I wasn't familiar enough with Achille to know every single piece of the story as it unfolded. Of course, even if I was more familiar, I know there are various versions of certain stories that are in the book, so I'm sure that the way the author adapted certain parts would have still provided something new.

There are some aspects of the book that stay true to Greek mythology, especially in regards to sexual violence, which makes certain scenes uncomfortable to read. At the same time, I found it interesting how the author seemed to have made certain decisions that highlighted that these things happened but also to try to exonerate the main characters from being "too" guilty of these same actions. This was particularly seen in Achilles' and Patroclus' treatment of Briseis. I won't go into details because it's a spoiler, but I got the sense that their treatment of her was heavily influenced by our time period and the two of them needing to be heroes in the story. That doesn't mean the main characters get off scot free. Achilles in particular does some pretty abhorrent things later in the story, but there did seem to be an effort not to make him as terrible as he could have been.

Overall, I enjoyed the book, though the time period did make the characters difficult to relate to at times. The story being told in Patroclus' point-of-view instead of Achilles' made it particularly interesting to me as he's not the supposed "hero" of the whole story. It was such a great way to explore this part of Greek mythology.

Posted by Haley Keller at 11:40 AM No comments:

Book Review: A Queer History of the United States by Michael Bronski 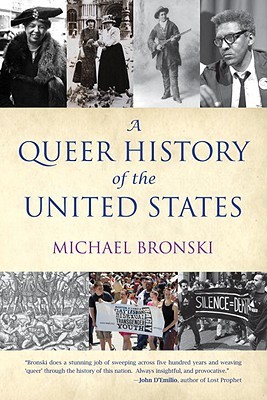 Winner of a 2012 Stonewall Book Award in nonfiction

The first book to cover the entirety of lesbian, gay, bisexual, and transgender history, from pre-1492 to the present.

In the 1620s, Thomas Morton broke from Plymouth Colony and founded Merrymount, which celebrated same-sex desire, atheism, and interracial marriage. Transgender evangelist Jemima Wilkinson, in the early 1800s, changed her name to “Publick Universal Friend,” refused to use pronouns, fought for gender equality, and led her own congregation in upstate New York. In the mid-nineteenth century, internationally famous Shakespearean actor Charlotte Cushman led an openly lesbian life, including a well-publicized “female marriage.” And in the late 1920s, Augustus Granville Dill was fired by W. E. B. Du Bois from the NAACP’s magazine the Crisis after being arrested for a homosexual encounter. These are just a few moments of queer history that Michael Bronski highlights in this groundbreaking book.

Intellectually dynamic and endlessly provocative, A Queer History of the United States is more than a “who’s who” of queer history: it is a book that radically challenges how we understand American history. Drawing upon primary documents, literature, and cultural histories, noted scholar and activist Michael Bronski charts the breadth of lesbian, gay, bisexual, and transgender history, from 1492 to the 1990s, and has written a testament to how the LGBT experience has profoundly shaped our country, culture, and history.

A Queer History of the United States abounds with startling examples of unknown or often ignored aspects of American history—the ineffectiveness of sodomy laws in the colonies, the prevalence of cross-dressing women soldiers in the Civil War, the impact of new technologies on LGBT life in the nineteenth century, and how rock music and popular culture were, in large part, responsible for the devastating backlash against gay rights in the late 1970s. Most striking, Bronski documents how, over centuries, various incarnations of social purity movements have consistently attempted to regulate all sexuality, including fantasies, masturbation, and queer sex. Resisting these efforts, same-sex desire flourished and helped make America what it is today.

At heart, A Queer History of the United States is simply about American history. It is a book that will matter both to LGBT people and heterosexuals. This engrossing and revelatory history will make readers appreciate just how queer America really is.

A Queer History of the United States is an attempt to explore exactly what the title says: the history of queer people in the United States. It's part of a whole series of books that explore often overlooked aspects of American history, but covering all of queer American history in one book is a big mission. The book starts before European colonization and ends with the year 1990. It doesn't cover anything beyond that except very briefly in the epilogue, and some more recent events, such as Obergefell v. Hodges, aren't mentioned at all because they happened after the book was published in 2011.

Considering the length of time this book is meant to cover, it's pretty short. Unfortunately, this means that many aspects of queer history are rushed through instead of being explored deeply. This book feels a lot like a highlight reel. It touches on each subject briefly before quickly moving on to the next.

While I do understand the value in a book that tries to cover the breadth of queer American history, this aspect of the book also seemed to do it a disservice. It wasn't just that what was touched on was only touched on briefly; it was also that there's a lot that didn't get touched on at all.

The term "queer" covers a lot of ground, and though the book uses that term in its title, the various groups that fall under the queer umbrella don't get equal coverage within the book. There are a number of queer identities, from asexual to nonbinary, that I don't believe were even mentioned within the book.

These limitations were also found in the language used in the book. It's difficult to use modern terms to label historical figures who never would have known those terms. Of course the book should acknowledge that and discuss how people identified themselves during a given era, which the book does. My concerns are more about the language used even when talking about more recent events.

The word "homosexual" gets a lot of use in this book. It's funny because this book does discuss how the term was coined to make sexuality sound more "scientific," and it also discusses the implications of that as homosexuality came to be viewed as a clinical mental illness. Of course, the word "homosexual" in and of itself isn't offensive, but it struck me as odd that it seemed to be the book's preferred term despite it sounding outdated today. It's also limiting because the term isn't an umbrella term for the entire queer community, but it kept being used throughout the book as if it was. And when "homosexual" wasn't used, "gay men and women" was often the phrase used instead, which, of course, are also not umbrella terms. In fact, those terms only describes a fraction of the queer community, yet they kept being used as if they were inclusive of everyone the book was talking about.

In the end, a lot of my frustrations with this book lie with what's not in it. Queer history is so often overlooked in American history that having just about anything that discusses any part of it feels like it should be a good thing, but I have a hard time overlooking all the places where A Queer History of the United States falls short. It might work as a starting point, but there's a long way to go beyond it.

Posted by Haley Keller at 11:42 AM No comments: