Book Review: A Disability History of the United States by Kim E. Nielsen 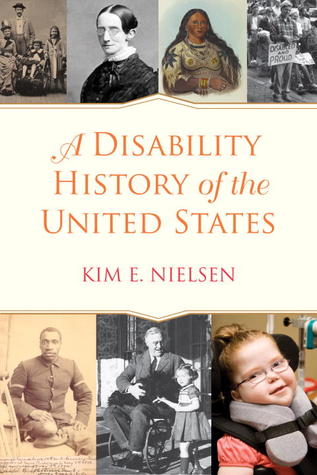 The first book to cover the entirety of disability history, from pre-1492 to the present

Disability is not just the story of someone we love or the story of whom we may become; rather it is undoubtedly the story of our nation. Covering the entirety of US history from pre-1492 to the present, A Disability History of the United States is the first book to place the experiences of people with disabilities at the center of the American narrative. In many ways, it’s a familiar telling. In other ways, however, it is a radical repositioning of US history. By doing so, the book casts new light on familiar stories, such as slavery and immigration, while breaking ground about the ties between nativism and oralism in the late nineteenth  century and the role of ableism in the development of democracy.

A Disability History of the United States pulls from primary-source documents and social histories to retell American history through the eyes, words, and impressions of the people who lived it. As historian and disability scholar Nielsen argues, to understand disability history isn’t to narrowly focus on a series of individual triumphs but rather to examine mass movements and pivotal daily events through the lens of varied experiences. Throughout the book, Nielsen deftly illustrates how concepts of disability have deeply shaped the American experience—from deciding who was allowed to immigrate to establishing labor laws and justifying slavery and gender discrimination. Included are absorbing—at times horrific—narratives of blinded slaves being thrown overboard and women being involuntarily sterilized, as well as triumphant accounts of disabled miners organizing strikes and disability rights activists picketing Washington.

Engrossing and profound, A Disability History of the United States fundamentally reinterprets how we view our nation’s past: from a stifling master narrative to a shared history that encompasses us all.

This is the second book in the series ReVisioning American History, which seeks to tell the history of groups that have been underrepresented in most US history books despite their impact on the country. I reviewed the first book in the series, A Queer History of the United States, a while back, and some of what I said in that book holds true for this one as well.

It's true that disability history isn't told as much as it should be, and that needs to change. While this is a starting point, it can only really be a starting point. People with various disabilities have come together to form a disability movement because it makes them a more formidable force. Despite this, the "disability movement" remains a coalition of very diverse groups. It's just impossible to tell the full history of all of these groups in one book. You can't cover them all in that much detail.

As one individual, I definitely can't name every disability out there and decide if they got adequately covered in the book, but from my own personal perspective, it did seem like some groups got covered more than others. Deafness and physical disability (lost limbs in particular) seemed to be covered more than anything else. Other disabilities, such as blindness or some mental health disorders, seemed to be spoken about less often.

I did enjoy what history was there. I think the stories told in the book are stories that are important to talk about and are things people should know. In the end, though, I think it comes down to the same thing I said about A Queer History of the United States, this book is a starting point, but it's really only a starting point. What I would really love is a series of books that focus on specific disabilities and are therefore able to go more in depth about each of them, but I recognize that that isn't what this book was meant to be from the start. I'm sure books like that must exist somewhere, and I'll make an effort to find them, which I suppose is a positive outcome of having a book like this.

Posted by Haley Keller at 3:33 PM No comments:

This is going to be a review of HSM season two. Like I mentioned in my video about season one, I got really into this show, so I have a lot to say. But I'm going to try not to go too overboard talking about every little detail.

This season introduces Lily, and whereas last season I expected Gina to be Sharpay 2.0 and then she wasn’t, Lily is a lot more of a Sharpay 2.0. We get hints about her backstory that could possibly flesh her out, but she doesn’t change much over the course of the season. It seems like she’s going to be in season three, so I’m curious if she’ll develop more then. But she is kind of an exaggerated villain in this season with how easily she gets a role at North High and all of that.

We also meet Howie in this season, and eventually, we find out that he’s North High’s Beast. He adds a bit more depth to North High since everyone else at that school just seems like villains. But it’s interesting because we never really see him interact with his classmates. Lily gets shooed out of Slices in the finale, while Howie's there and no one minds. Howie himself doesn't seem to really want her there. It’s an interesting dynamic.

I was worried that he was working with Lily during the show when he was acting weird around Kourtney, but luckily, he seems to really just have been nervous because she was so good. Which is really cute. They’re adorable together.

Ricky and Nini also break up in this season, which isn’t hugely surprising after what happened earlier in the season. I do feel a little frustrated that getting back together was such a big thing in season one but then they broke up in season two. Because when relationships are back and forth like that in shows, it gets frustrating to watch. Obviously, breaking up is normal for teenagers, but in terms of a story, I don't want to watch the exact same thing happening over and over.

In terms of what happens with Rickey and Nini in season three, I don’t know what I want for either of them now. But it’s definitely not Ricky dating Lily. At least that’s how I feel now. Maybe that’ll change in the next season if Lily becomes more interesting.

Gina and EJ was a storyline that I wasn’t expecting but absolutely loved. The way their relationship developed over the season was cute. I loved that so much. Really. That was one of the highlights of the season for me.

Carlos and Sebastian were another highlight. They were adorable in this season. Carlos also sings Disney’s first same-sex love song, which has been a long time coming. Everything they did with them this season was great. I loved it too.

During the final show, Lily steals the harness. The show goes on anyway, and we hear that the transformation was passable but don’t see it. But nothing huge happens with that. We don’t find out the results of the rewards. Lily doesn’t get found out. So I’m curious if that’s something that will carry over into next season.

Since Ricky did contact Lily what I’m wondering is if something will happen between them and then he’ll learn the truth about what she did, which will start drama. Then Lily will feel guilty and that might be what spurs her to change. That’s what seems most likely to me at this point, but I suppose that we’ll see.

There are still a lot of things I’m curious about next season. Like where Lily's going as a character. And is that really it for the awards? (I get the statement of them not caring, but I admit that I care.) The love triangle between the teachers and Ricky’s dad just kept going this whole season with no resolution. I’m definitely ready for season three to see where it all goes.

Posted by Haley Keller at 11:05 AM No comments: